In this post I will attempt to explain how I use my 2nd generation Apple watch, an ancient Garmin Edge 705 bike computer, equally ancient videos from Sufferfest, and a Star Trac spinning bike to make my garage into a cardio wonderland.  This is my way of avoiding the extravagant cost of the new home workout systems that are out there.  (This is a work around, and I understand not everyone has this kind of stuff laying around, but covid forces us to think outside the box, and this is old tech-cheaply found used on the web, or freely streamed.)

Before we begin, a commercial came on the other day for some medicine, I don’t remember which, and the list of side effects was at least ten times longer and twice as terrifying as the medical condition itself.  However, it did remind me that before I say another thing about health I better put out a disclaimer.  So here it is:

Disclaimer: I am just some guy.  You are welcome to my advice, but it’s up to you to decide for yourself if I’m full of crap.  By acting on any of the suggestions I make here you are accepting responsibility for any and all consequences.

Let’s talk about cardio today.  According to the Mayo Clinic:

You can calculate your maximum heart rate by subtracting your age from 220. For example, if you’re 45 years old, subtract 45 from 220 to get a maximum heart rate of 175. This is the average maximum number of times your heart should beat per minute during exercise.

Admittedly, this is not the most precise way to measure your maximum heart rate, but then I’m not trying out for the olympic bobsled team either.  It is important, however, to have at least a ballpark idea of your max heart rate for some key reasons.  First of all, in order to know if you are working out with intensity your workouts will need to be based off of this number.  Secondly, for safety’s sake you need to keep yourself in your zones.  This is especially important for aging farts like myself who like to pretend we still have all the vim and vigor of the young whippersnappers.  Thirdly, you need this number to set up your devices if you’re interested in using a modicum of precision in your training.  Let me explain.

As I stated in earlier, the Covid pandemic has forced me to find new and interesting ways to challenge my body.  No, that’s not exactly right. It has actually forced me to dust off some old technology that was pretty cutting edge a decade or so ago and combine it with some newer tech, like my Apple watch, to get a more complete picture.  Speaking of “edge”, one of those pieces of technology is the Garmin Edge 705 bike computer.

(I can’t find a Creative Commons image for this elderly piece of technology.  Hopefully, because I’m so positive about it, Garmin will be ok with my using this image!)

Now, you could simply use any heart rate monitor to make sure you are staying in your zones, but that requires thinking, which I don’t know about you, but is not my favorite thing to do while working out.  I kind of like my workouts to be the time I don’t have to think!

Let me explain what I mean.  You can see from the photo above that a rider can have up to 8 data windows on a single screen.  Most of these are irrelevant for a person riding a stationary bike in a garage, especially since many activity trackers have an activity function that will track a bunch of statistics like workout time, intensity, etc.  It’s the heart rate window that I use this for.  Using the Mayo formula above I can set up zones for intensity.

You can see in the photo above that I have set my max heart rate based on the Mayo formula.  I then set five zones, with trial and error, to fit how hard I like to spin(initially, I set them to end at 100% of max, but never felt like I was pushing it- that’s why my zone five goes above 100%).  Once your device is set you’re ready for the next step. (Incidentally, there are apps for this that you can put on your phone, but then you would need a different device for the next step, I used to use my laptop set on a table in front of me.)

Sufferfest is a company that I guess was recently acquired by Wahoo, the fitness trainer manufacturer.  Back in the day sufferfest made cycling videos with footage from actual tour events.  That’s what I have saved in a google drive folder and use for my training.  (Sufferfest is currently offering a streaming app.  It’s free for 14 days so you can get a taste.)

The older videos look like this(use your imagination-this is a still from streaming video!): 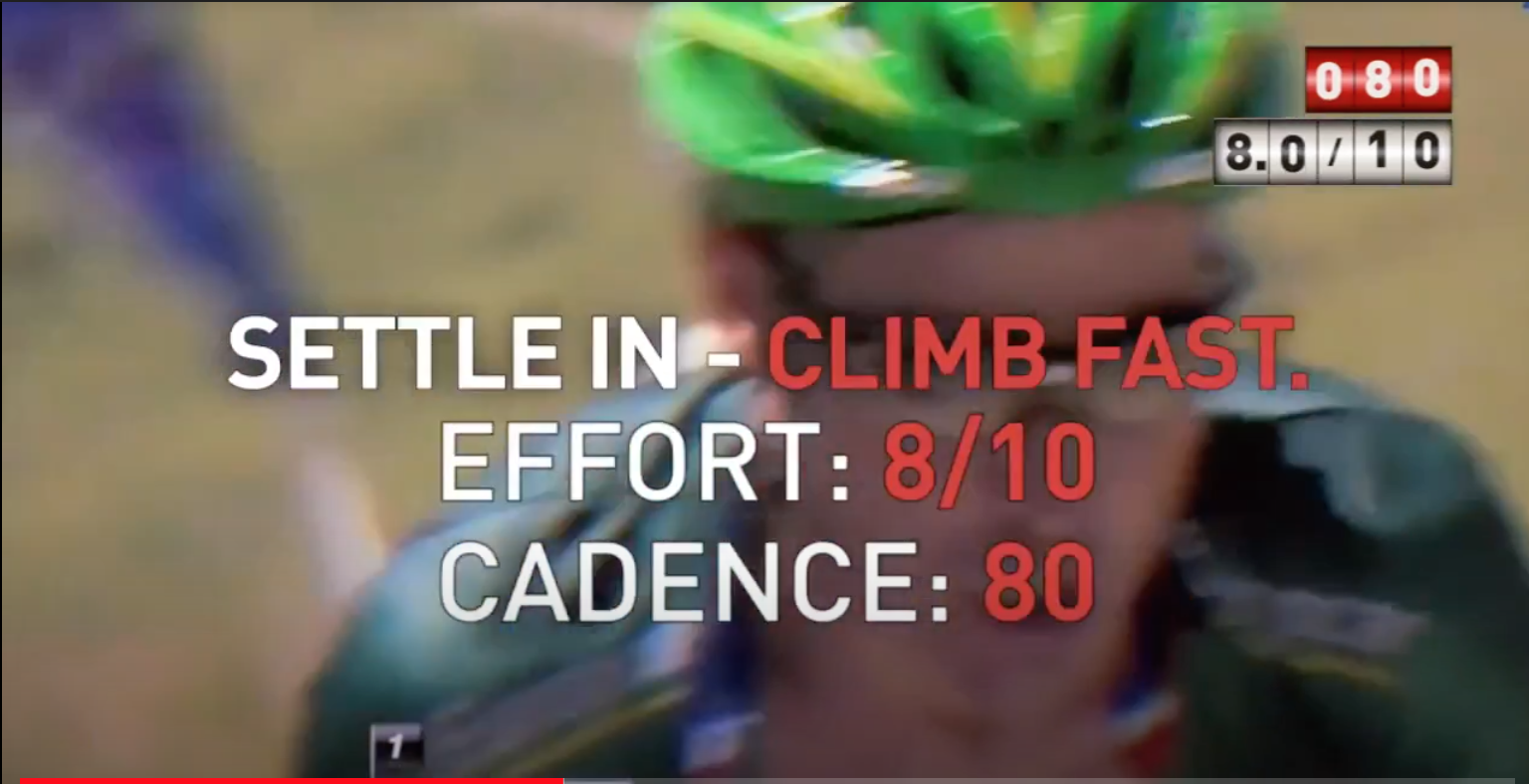 All the work done setting up your zones has been for this!  The text in the middle of the screen appears only periodically, but the numbers in the upper right corner are always visible. The newer videos have even more information like watts, or work, or power, but my old spinner bike doesn’t have a way to track those anyway. Besides, I have found that cadence and heart rate are all I need to get destroyed.  8.0 / 10 – that means 80% of my max heart rate.  At a cadence of 80 rpm’s I need to peddle at a resistance level that raises my heart rate to 80% of max.  It takes a little practice to find those levels, but it’s doable.

To make it more realistic the videos will change the numbers to match terrain, or race conditions.  For example, another rider might attack, and you will be instructed to peddle at level 10 for a bit, or to stand.  That’s why having your zones planned out ahead and on the computer one the handlebars in front of you makes life so much easier.  No trying to determine what 8.25% of 166 is.  No having to look at your wrist while peddling from a standing position.

I found a six dollar phone clamp at the hardware store that attaches to my spin bike handle.  I use it to watch my Sufferfest videos that are all uploaded to a google drive folder.  I use wireless headphones to further streamline the process.

That’s it. There you have it, the poor man’s workaround to the super expensive training hardware/software “solutions” that are out there.  Incidentally, there are some free videos on Youtube that use much of the same type of content as Sufferfest.  The Vegan Cyclist, and CTXC Videos are two that come to mind, but there are others.

A final benefit to think about is that if you stream the video portion to say a laptop or TV, then multiple people can train at once.  My friend Tim and I used to train together, even though he was ten years younger.  Because his max heart rate was ten points higher than mine, and he personalized his workouts to his zones on his own device, we could ride at different levels and get workouts tailored to ourselves.

The latest news on WordPress.com and the WordPress community.